This weekend, I’ll be heading down to Hunt Valley, MD to take part once more in the festivities put forth by the Star Trek Association of Towson. 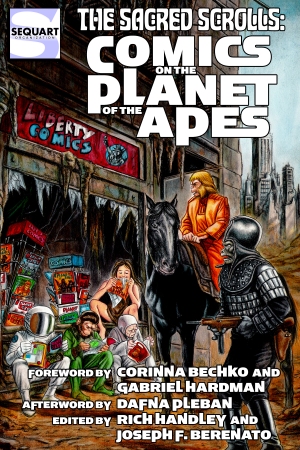 Yet again, they saw fit to invite me as a guest.

The exciting part is that this weekend marks the world premiere of The Sacred Scrolls: Comics on the Planet of the Apes, edited by both yours truly and Rich Handley, ape extraordinaire. Copies of it will be on sale Friday night at the Meet the Pros event, and afterwards through the ministrations of Patrick Darby of Novel Places, the convention’s bookseller.

Along with The Sacred Scrolls at Meet the Pros, I’ll also have copies of Gotham City 14 Miles, Star Trek: Gold Key Archives Volume 3 (for which I wrote the introduction), and, of course, New Life and New Civilizations: Exploring Star Trek Comics.

I’ll also be taking part in four panels this time around:

And, of course, I’ll be wandering the convention floor, and sitting in the audience for various panels. So stop down and say hi!