As most of you know by now, I’m sure, I am very excited about the pending release of the first book with my name on the spine — New Life and New Civilizations: Exploring Star Trek Comics. I am pleased to announce that the book will make its world premiere during the first weekend of August here: 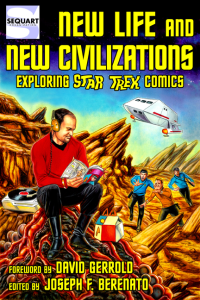 Shore Leave 36 will take place August 1-3, 2014 at the Hunt Valley Inn in Hunt Valley, Maryland. Not only will the book make its debut there, but I have also been invited as a guest.

Me. I am a guest. An invited guest. At a sci-fi convention.

Oh, if only I could go back and tell this to my twelve-year-old self! But I digress…

I will also be moderating a panel discussing both the book and Star Trek comics in general, along with contributors Robert Greenberger, Keith R.A. DeCandido, Dayton Ward, Kevin Dilmore and others.

I am, needless to say, ridiculously excited about this.

I’m also incredibly fucking nervous. There’s a reason I chose writing over public speaking. Hopefully, my fellow panelists will take pity on me, and pick up the baton when I invariably drop it. (Also, I’m sure there’s going to be video of it somewhere when it’s all said and done, so that either my triumph or my blunders will live on the interwebz forever.)

The schedule has yet to be set so I don’t know which day or what time the panel will happen, but rest assured I’ll post it here when it does.

If you haven’t yet, you can read the official release for the book here, then go to Facebook and like the official page. You can also read two great articles by Eric “Gator One” Cone at VisionaryTrek.com here and here.

One thought on “We’re Closing In…”