Field research is something that is largely foreign to me. Research itself is not: I’ve had my nose in books and magazines since my earliest memories. I used to peruse a card catalog with the best of them. In modern times, my Google-Fu is strong.

But actually getting out in the field? Not so much.

To that end, I went to a local bookstore to practice taking field notes. I walked around the cafe there, interacted with a few people, and set up shop at a table to observe my surroundings as best I could. What follows here is an attempt to transcribe these jottings into much fuller sentences, which hopefully will present a bit of a clearer picture than the disjointed pictures you’ll soon see. 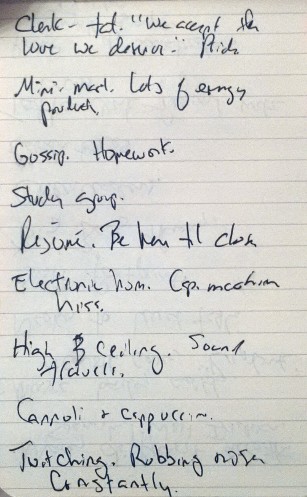 The barista behind the counter had a tattoo on her left forearm. Her sleeve was rolled up, exposing it. When asked what it said, she showed it proudly. “We accept the love we we deserve.”

The cafe itself was a non-standard bookstore cafe. It was set up more like a mini-mart; lots of microwavable food, and a LOT of energy products: drinks, bars, etc.

Two college-aged females waiting for their lattes were talking about their classmates, and then comparing homework loads.

One group of approximately ten men was engaged in a study group of some kind.

One individual had brought her laptop to use the cafe’s wi-fi to update her resume. She anticipated being at the store until it closed.

The high ceiling of the cafe allowed sound to travel far. There were few ambient noises besides the background music, the hiss of the cappuccino machine, and a general electronic hum.

In order to be less noticeable in my observations, I ordered a cappuccino and cannoli in an attempt to blend in. (The cannoli was one of the best I’ve had outside of Rome.)

A gentleman came in and sat in the corner with his back to the wall. He kept twitching and rubbing his nose as he looked around.

The patrons exhibited a number of different accents. The most recognizable were Spanish (not Puerto Rican, though; more South American) and Caribbean, possibly West Indian or Creole.

The background music was barely audible in the cafe, possibly due to the high ceiling. One of the songs playing was an acoustic banjo cover of “Kryptonite” by Three Doors Down.

One of the tables was uneven. Someone had used a folded-up napkin to level it.

All over the floor throughout the cafe were salt footprints, brought in from the sidewalks salted against ice.

The television in the far corner of the room was showing “The Big Bang Theory.”

Two college-aged females were sitting at a table next to me, discussing upcoming cheerleading events.

The cafe was decorated in earth-tones: browns, yellows, brick reds, etc., as was most of the bookstore.

The barista with the tattoo left her station every five or so minutes to go to a table with a sports bottle to take a small break.

There were three small groups and a number of individuals. They were small pockets of socialization that did not interact with one another. They were insular in that regard.

The gentleman in the corner with his back to the wall had a laptop with him. When he used it, he only used the forefinger of his right hand to type, and did so with some force.

The aforementioned study group was a Bible study group. They compared passages between different translations of the Bible.The members ranged in age from early 30s to late 50s.The barista confirmed that they’re there every Tuesday night.

A bulletin board underneath the television had local ads on it for things like tutors, furniture, jobs, etc.

The cafe was not very busy, but the barista stated that was usual for a Tuesday.

Some of the music that was heard came from the soundtracks of Wicked and The Lord of the Rings.

The only other pervasive sound was a consistent squeak from the elevator.

My next entry will expand on these notes a little further.

Hope you’ll check it out.

One thought on “Practicing Fieldnotes”